If I asked you to guess something personal about me I can virtually guarantee that no one would predict what I'm about to tell you - I make my own cheese. I've been doing it for a few years now - not overly regularly but one thing I do when I'm bored is learn something new. And a few years ago I learned how to make cheese. I've had a few hits (mozzarella, cheddar) and a few misses (a Brie which ended up harder than a hockey puck and one which I left in the garage to age but forgot about and by the time I found it had produced a swarm of flies and maggots of biblical plague proportions) over the years.

Last week I went to the supermarket for the weekly shop (just to get essentials and with no thoughts of buying 30 pints of milk) and they had an absolute fridge-load of full cream, non-homogenised (that's important - you can't make cheese with homogenised milk as the fat globules are too small) milk so I decided to pick some up and make some cheese as I've got quite a bit of time on my hands at the moment.

So when the cost centres went home after the weekend I told Mrs AC that we were gong to spend the day making cheese - stilton in this case. She initially thought this was hilarious and that I was joking - nope. You get to be the cheese maker's assistant I told her - chief job being timing and pouring the wine. The wine having no relevance to the cheese making process other than making it more fun!

We ended up making these 2 beauties - unfortunately I didn't have any different culture so had to make 2 Stilton rather than waste the milk. 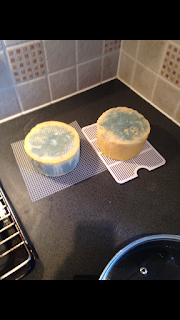 So now the waiting begins - the book says to let them mature for 6 to 8 weeks but given the current situation I think we’ll still be in lockdown by the time they are ready.

What’s the weirdest activity that you’ve been doing whilst in lockdown?
Posted by AyeCarambaPoker at 8:36 AM