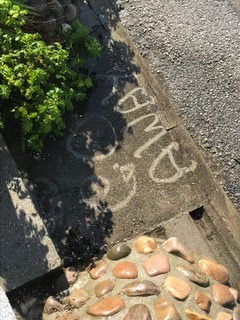 Now if you're a regular reader of my ramblings you'll know one thing about her - she's as mad as a box of frogs. Every time she tells me about anything in her life it usually breaks the dial on my insaneometer. Or it will be inane. She'll regale anyone who listens with the most banal story of everyday life as if any trip out of the house is the search for the holy grail. The other day she actually rang me up and wittered about going to the local grocery store with the highlight being that they'd run out of the yogurts she usually buys and she'd bought a different brand.

But despite her obvious insanity she's actually very self sufficient - she lives in the middle of nowhere but has a wide circle of friends and often travels down to London to see my cost centres and abroad to visit family - which is why I'm now writing this up. One of my brothers lives abroad and every year or so my mother travels over to annoy see him and visit friends she's made. This obviously involves booking a flight - which can take her forever as she procrastinates the merits of each individual flight option and regularly rings me up to ask various details about aircraft types, seating options and meals. My usual response is "how the fuck would I know?" because she's asking what meal they will be serving on a 6 hour flight. Now when I travel I'm usually in the pointy end but my mother will only ever book economy (coach) so asking me anything about seats is a waste of time but I'm sure some people manage to survive in the cramped seats without starving to death or resorting to cannibalism. I'm imagining meal times involve some sort of communal trough but that's about the height of my knowledge.

It's taken her 5 weeks of dithering but she's actually worked out what flights she wants and is just about to book it but there's a problem. Her neighbour, who usually looks after her cat and dog when she's away, is away at the same time. Can I go up to Scotland to look after them? I'd already told her that I'd probably be in the UK and I can work from virtually anywhere so fine - I may need to take a day trip or two down to London for meetings but I can work around it.

Normally what I'd do in this situation is fly up to Scotland, coinciding with her southbound flight so I get the absolute minimum of interaction with her and pick up her car before reversing the process on the way back. But this time it's different. She's got some jobs for me around the house plus she needs to show me (in her words) "how things work as I'd have no idea how to work things around her house". This is despite me having been there numerous times over the last 5 years since she moved there, including at least once every year whilst she's been away. Oh fucking joy. Not only is she going to witter at me for 2 days, I've got to do manual labour around the house (come the year zero agrarian revolution I'm the first to get shot as apart from some kitchen burn and knife scars I've got soft hands that refuse to do manual labour).

But it doesn't end there - I've then got to drive her to the airport whilst she witters at me, the last time I did this one of her topics included whether her dog would remember living in the town we were driving through. Fuck knows what actually goes on in her head to have these thoughts but the 1 hour journey feels a lot longer. Hopefully a fuel tanker will crash into us, putting me out of my misery. I feel sorry for the poor sod who has to sit next to her on the plane though - that 6 hour flight is going to feel like days as she doesn't use the excuse of only having met someone as a reason not to witter constantly at them.

I'll at least get a day of drinking under my belt - at the airport, on the flight plus a couple of beers at the station waiting for the train. Then it's a day or so listening to her wittering before I get to do some of her household jobs - hopefully one of them will involve a chainsaw and I can arrange a little accident!

On a more positive note there was quite a lot of booze leftover from our stay at Christmas (which I secreted in her garage) which is probably near its expiry date so at least I'll have something fun to do when I'm up there!

I actually wrote the above earlier this week whilst travelling to the airport but forgot to post it - once I arrived these are the instructions my mother needed 2 days to give me:

How to use the tv - it's a fucking tv how complicated can it be? Completely ignoring the fact it used to be mine and I gave it to her when I upgraded mine a few years ago

Tidy up her garage because she keeps falling over things - apparently it's easier to do this than wait for the light to switch on so she can see anything that she might fall over. I did manage to tidy up the beer I'd left in there at Christmas but my enthusiasm for anything more productive waned as soon as I'd found it.

Jet wash the patio and path - this is fine and I've written a message in her path to welcome visitors. I did write a ruder one but didn't think she'd appreciate that - I forgot to take a photo before erasing it so you'll have to make do with the politer version.

Thank her friend for the piece of cake she sent me - her friend who came to Christmas sent me a piece of her birthday cake. Her birthday was 6 weeks ago and my mother ate the cake. So I have to thank her for a piece of 6 week old cake which I didn't actually see? Fuck right off

Be careful driving her new car because it has a turbo - she has no idea what a turbo is or does but is convinced it makes it faster than an F1 car. Me pointing out it's only a 3 cylinder 1.1 litre with about 100hp apparently made no difference. I don't think I've ever owned a car with less power. I did clean it though - she's had this car for less than a month and it was a health hazard with hair and drool everywhere as she often has the dog in there - I hope the drool was from the dog anyway.

Water various plants - even this was made more complicated by her writing a list of everything in the house and detailing watering frequency. But instead of writing obvious notes such as "blue flower in the conservatory" she's detailed their botanical names as if I'd know what a hydrangea is - she might as well have called them Steve, Frank or Dave for all the help it made.


I've barely had any human interaction since Tuesday but luckily Mrs AC (who I haven't seen since Super Bowl weekend) is arriving from NY on Friday so I'll need to pop down to London to pick her and the boys up - then I'm likely going to be over in LA & Vegas towards the end of the month.
Posted by AyeCarambaPoker at 9:06 AM